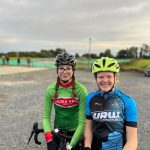 Super evening for the first round of our CX Winter league supported by Niall Clarke Oils. We had some great duals in both races. In our Youth race, we had a small turnout with many casualties not making it on time for the race start due to traffic. But to their credit Ciara O Connor, Logan McAreavey, and Conor McGuiness gave it their all and blasted around the short track.

Next, we had the U14-Adults race combined with some heavy hitters turning up. From the whistle, Sean Nolan set a hot pace and had company for a lap or two but showed why he’s one of the best in the country later on. It was great to see Sean back on the bike and racing after a tough few months. Aoife Craig finished in first place in the girl’s race. She had extra motivation to stay in front of her dad Gerard. There were plenty of notable performances but one id like to point out is the improvement of Hazel Murphy. Hazel only start cx not so long ago and she going from strength to strength with every race.

Well done to everyone.